Germany in the “super election year” 2021: What comes after the Merkel era?

Olaf Scholz has actually done it: after a furious race to catch up, the SPD received the most votes in the federal election, putting it ahead of the CDU/CSU for the first time since 2002.

So, while the Social Democrats are celebrating a huge success, the CDU/CSU is in absolute crisis mood in view of the historically poor election result. The party announced its intention to analyze the mistakes of the election campaign in depth and, if necessary, to reposition itself in terms of personnel.

In addition to the SPD, the FDP and the Greens are among the winners of this election, as their results have made them virtually indispensable for a place in the new government. Things went less well for the parties on the fringes of the political spectrum. The Left Party barely made it into the German Federal Parliament, and the right-wing populist AfD also suffered losses.

SCHOLZ VS. LASCHET: THE STRUGGLE FOR CHANCELLORSHIP

Election night was chaotic. Despite Olaf Scholz's election victory, the crisis-ridden CDU/CSU laid claim to forming a government and providing the chancellor. There was talk of making an attractive coalition offer to the FDP and the Greens. But the conservative camp has not yet given up immediately: if the coalition negotiations between the SPD, the Greens and the FDP fail, they want to be ready and assume responsibility. Thus, the last word on the new government and Angela Merkel's successor has not yet been spoken. 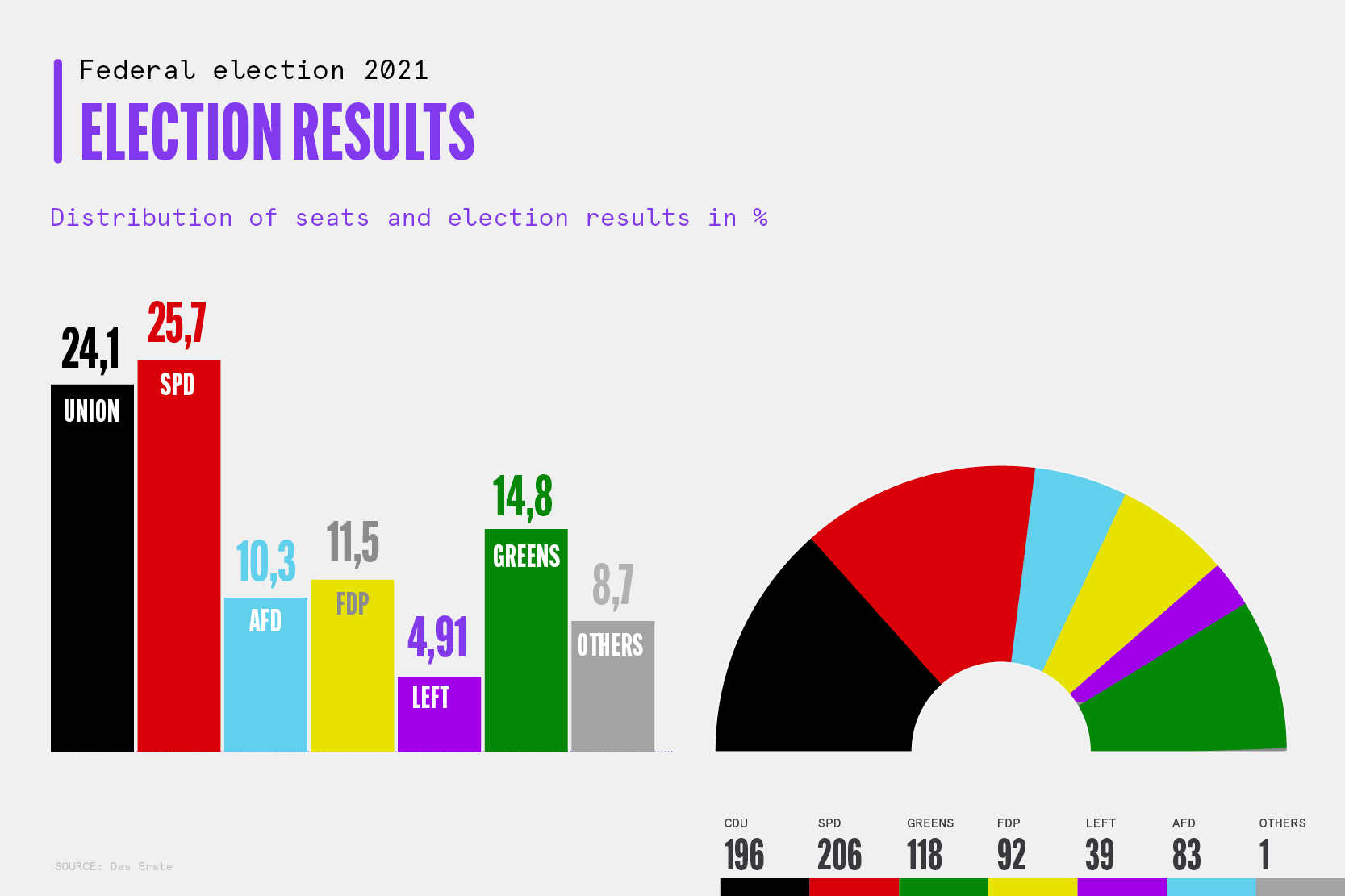 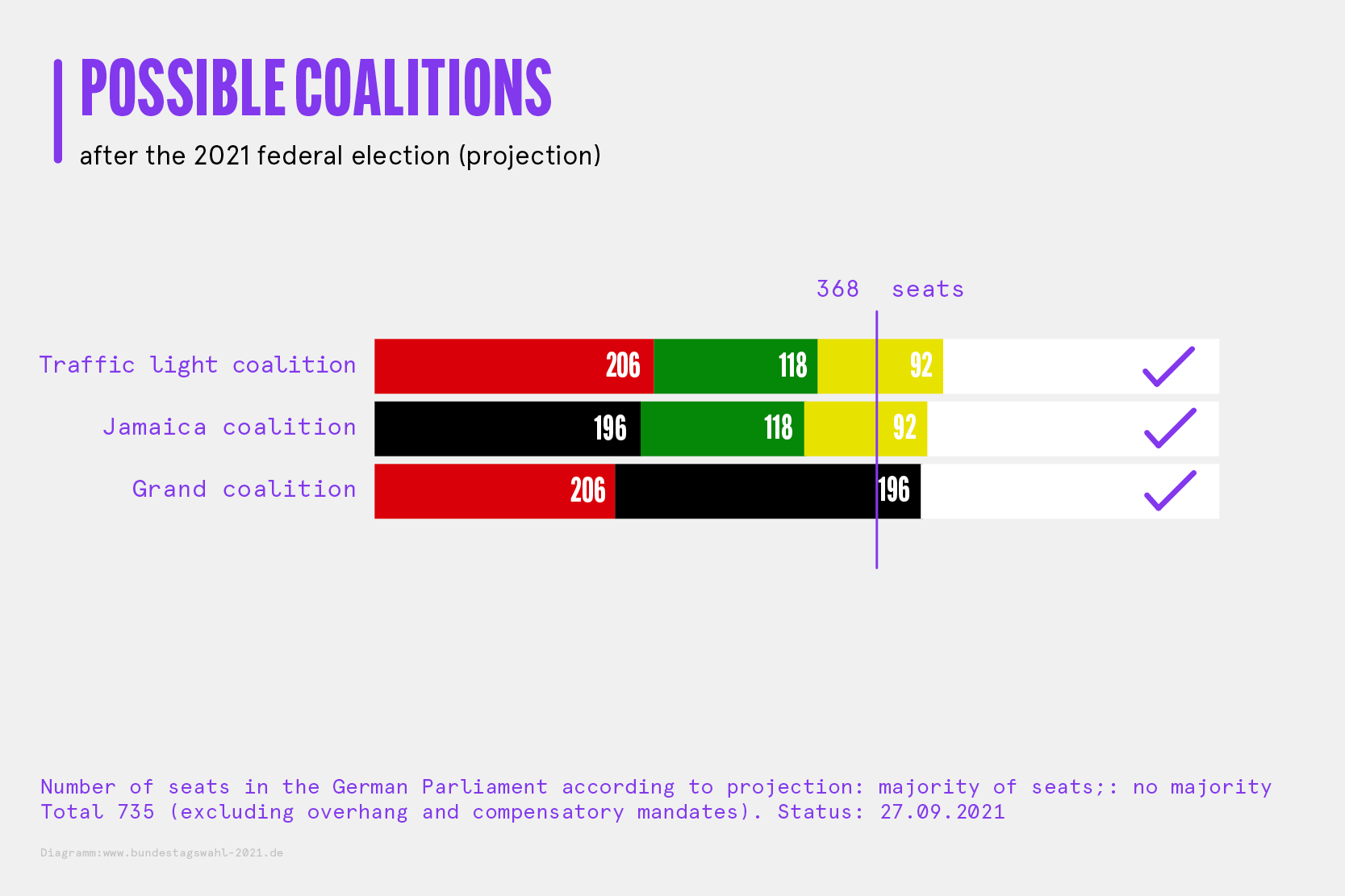 One thing became relatively clear during the election campaign: the re-formation of a grand coalition between the CDU/CSU and the SPD is unlikely. For all alternative constellations, the FDP and the Greens will be needed as junior partners. As the election winner, Scholz now has the prerogative to lead coalition talks. He has already clearly emphasized that he wants to form a "social-ecological-liberal coalition" with the FDP and the Greens. According to polls, this is also the preferred option of the German population. But the road to a "traffic light" coalition will not be an easy one. Since the FDP's financial and economic policy visions differ fundamentally from those of the Greens and SPD, significant concessions would have to be made in the liberal camp. All sides will work hard to find a solution, but success is not guaranteed. Scholz has repeatedly emphasized his ambitions to form a new government until Christmas.

If the "traffic light" coalition fails, a "Jamaica" coalition between the CDU/CSU, FDP and Greens could become a serious possibility. But the conservatives would be in a weak negotiating position due to their horrendous election results, which the Greens could use to push through their social-climate policy agenda. For the FDP, an alliance with the CDU/CSU would naturally be more obvious than with the SPD. However, a government without consideration of the actual winner could have fatal political consequences, which Olaf Scholz has already pointed out: “No one can go past the voters’ vote without damage”.

In Spite of the Debt Mountain

The Ministry of Finance

The Digital Readiness of German Politics

What Armin Laschet's nomination spells for the election